Candace Sara Ciju couldn’t believe it when she received an email saying she had received the Lester B. Pearson International Scholarship, which covers four years of study at the University of Toronto for international undergraduate students.

“I think I read it about 20 to 30 times just to check,” said Ciju, who is from India and lived in the United Arab Emirates.

She remembers calling her mom over to double check the email.

“It was a very happy moment. We were just jumping around the house,” said the Trinity College student who is studying humanities in the Faculty of Arts & Science. “I’m just so grateful to have this experience and to be part of this esteemed scholarship.”

At this year’s welcoming ceremony for the Pearson Scholars, Ciju was selected to address the audience in the debate room at Hart House. She encouraged the other 36 newly arrived international students – representing 25 countries from around the world – to seize the opportunity and make the most of what U of T has to offer.

U of T President Meric Gertler, Vice-President, International Joseph Wong and Vice-Provost, Students Sandy Welsh attended the event and welcomed the 2022 cohort of Pearson Scholars to the university.

“On behalf of the entire University of Toronto, I would like to offer an official welcome to our newest cohort of Lester B. Pearson International Scholars,” President Gertler told the students.

“All of you have already demonstrated exceptional academic ability and leadership qualities, and you were chosen for this scholarship because of your tremendous potential to contribute to the global community.”

He encouraged the scholars to make the most out of the learning opportunities U of T has to offer both inside and outside the classroom.

U of T President Meric Gertler, centre, takes a photo with the 2022 cohort of Pearson Scholars. Vice-President, International Joseph Wong stands to his left. Vice-Provost, Students Sandy Welsh is on his right (photo by Lisa Lightbourn

Welsh similarly said the scholars should connect with as many classmates, mentors, professors and U of T staff as they can and to take advantage of the extra-curricular activities available on campus.

Wong, meanwhile, reminded the scholars that there will be difficult times, but that there is a large community of support around them.

Named after Lester B. Pearson, a U of T alumnus, former prime minister and Nobel Prize recipient, the scholarship recognizes students who demonstrate exceptional academic achievement, creativity and leadership – and a commitment to making an impact in their communities.

The scholarship covers four years of study at U of T for first-entry international students in undergraduate programs, including tuition, books, incidental fees and residence support. This year’s students were selected from 1,892 nominations submitted by high schools worldwide.

At the reception, U of T News spoke to five of this year’s Pearson Scholars about what brought them to U of T and what they hope to accomplish in the future.

From Tanzania, lived in Kenya 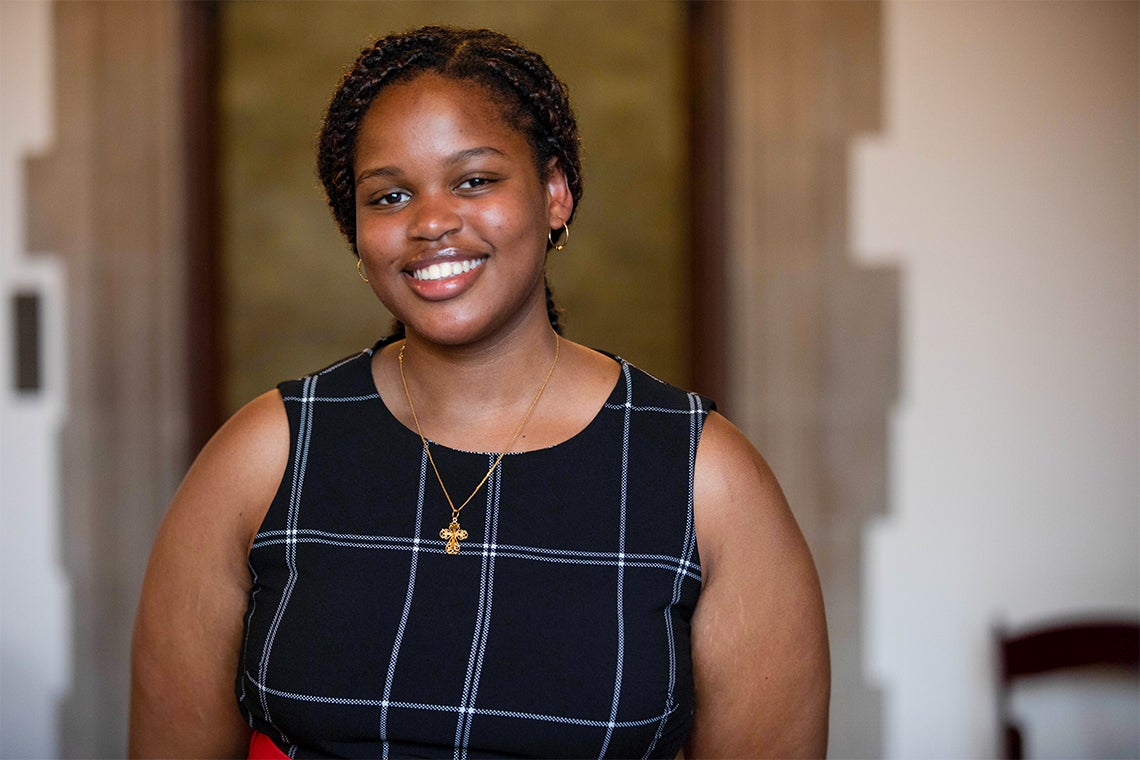 Lizramona Lugano Mwakitwange wants to empower women across Africa and around the world to get involved in STEM subjects.

“A big part of my work was trying to raise awareness about African women in science who are paving the way for girls like me to succeed,” she said.

In high school, Mwakitwange worked with platforms such as Girls in Science 4SDGs and the New York Academy of Sciences to build her leadership and scientific skills. She said a personal highlight was addressing the United Nations General Assembly last year on the International Day of Women and Girls in Science.

“I got to represent Tanzania and have an opportunity to create a different perception of who Tanzania women – and who African women – can be.”

Mwakitwange said when people think of a scientist, they often think about someone who exists only in a lab or in an office. Joining U of T will give her an opportunity to change that perception, too.

“A scientist can also be a musician, an artist,” she said. “My goal is to try and encourage girls and boys alike all over the world that they can be a multipotent individual, that they can make change within our world through different passions and try create something innovative and fruitful.”

She said it not only felt surreal being selected as a Pearson Scholar, “It shows people in my community that they can do it. It’s not outside their reach.”

From Ukraine, lived in the United Kingdom Mariya Grynevych lived in Liv, Ukraine, for 17 years before she received a scholarship to attend a boarding school in the United Kingdom.

In her home country, she volunteered for many initiatives and founded a non-profit organization. Her main objective? Provide accessible education to students in small villages in Ukraine.

At age 13, Grynevych travelled across Europe as a volunteer with a delegation from Children for Peace All Over the World to raise humanitarian aid funding for children affected by the war in the east of Ukraine. The young group of volunteers even addressed the Pope in the Vatican.

“That’s when my interest in politics, international relations and education began,” she said.

At U of T, Grynevych wants to make as many connections as possible and is looking forward to her academic experience.

“I just want to make the most out of this opportunity,” she said. “Every time I go to a new country, I gain so much knowledge and so much more perspective. I can see [an issue] from so many different sides.”

She hopes to return home to Ukraine after she graduates to help rebuild the country, which was invaded by Russia earlier this year.

U of T Mississauga, studying commerce 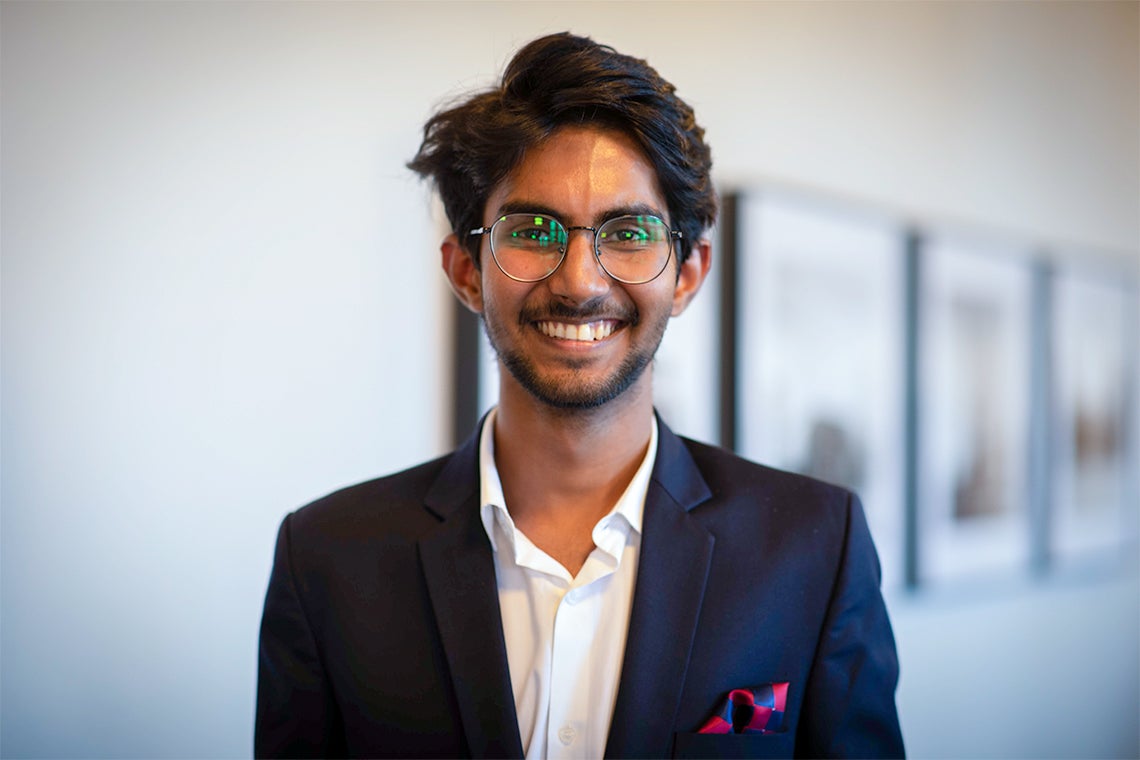 When Muhammad Masood landed in Toronto in last month, it was the first time he had been outside Lahore, Pakistan.

It’s been a culture shock, but Masood said he’s making the adjustment.

“I’m getting used to it – meeting new people, getting to know them and their experiences and cultures,” he said. “There are people from around the world here – that’s one of the reasons I chose to apply to U of T.”

Growing up, Masood helped his father’s business by entering purchases and sales, developing an interest in accounting and finance in the process. He went on to complete accounting internships with NGOs and other organizations.

He said he feels lucky to have received the Lester B. Pearson Scholarship and hopes to meet as many people as he can, build a good community and graduate with good grades.

“I want to get into the Rotman School of Management after I graduate,” he said. “That’s kind of a dream – just like the Pearson Scholarship.”

From Egypt, lived in the United Arab Emirates 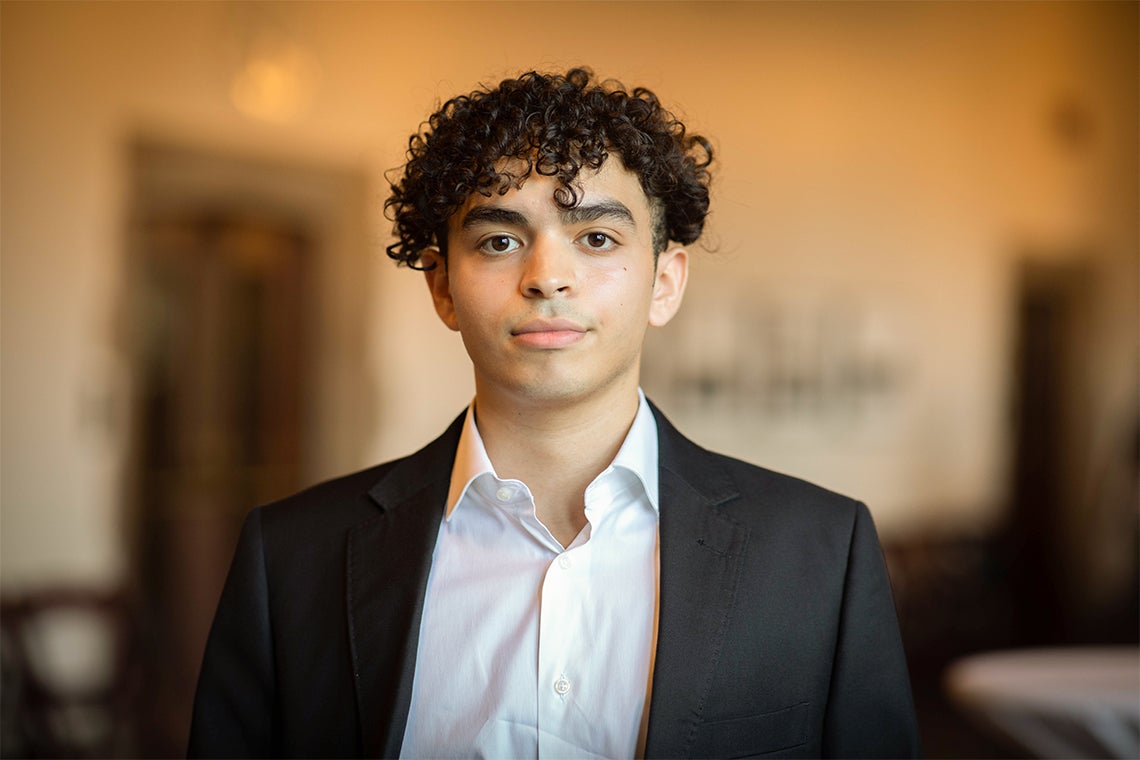 At the age of 12, Khaled Samir Mohamed El Telbany knew he wanted to be an entrepreneur.

“I used to buy a pack of a hundred marbles from my local grocery store for around a dollar and I would resell 10 marbles for $3,” he said.

In high school, he founded several clubs and was the captain of the soccer team. He was always keen to explore new business ideas.

Moving to Toronto has been a big transition. He was born and raised in Alain, UAE, a relatively small city.

“Toronto is 43 times bigger than Alain,” he said. “It’s been a pretty cool transition. The scholarship is probably the best thing that’s ever happened to me.”

He’s very excited to explore the opportunities at U of T and consider his future paths.

“I’d love to launch my own company or work at a finance company. I know that I want to continue my path in business.”

From India, lived in the United Arab Emirates

Studying humanities in the Faculty of Arts & Science, Trinity College 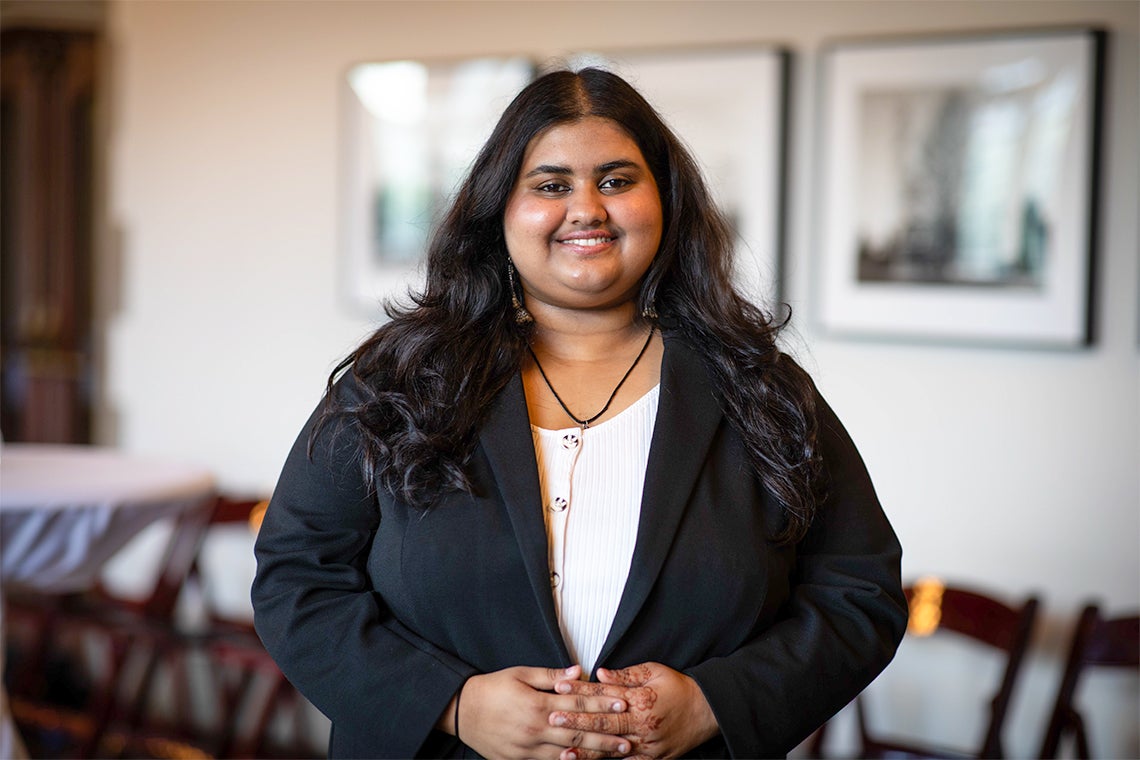 At U of T, Candace Sara Ciju hopes to continue pursuing her passions in leadership, international relations and sustainability.

In high school, she served on the student council for four years, moving up the ranks to become president. She also led several clubs, served as the editor-in-chief of the school’s newsletter and was one of the UAE’s sustainability ambassadors with Masdar, a government-owned renewable energy company.

She launched a Reuse of Books campaign, an initiative to collect used books and resell them at a cheaper price.

“We’re promoting the reading habit among children and being eco-friendly by reducing the reprinting of books,” she said. “All the profits go to charity.”

After graduation, Ciju hopes to work for the United Nations.

“I’m very passionate about international relations and diplomacy. I have a few big dreams and I hope I will be able to achieve them.”

U of T welcomes 37 Pearson Scholarship students from 25 countries