The potential of microcredits in Europe

Muhammad Yunus (Chittagong, Bangladesh, 1940) received the Nobel Peace Prize “for his efforts to create economic and social development from below”, a tough struggle featuring microcredits as its most powerful weapon. Yunus, born into a family of goldsmiths, realised that the plight of the rural poor was perpetuated by the fact that banks would not lend to people who lacked collateral and therefore became excluded from the system. Against this backdrop the concept of microcredit was born, when he lent $27 to a group of women who were living in poverty despite being paid by the piece to work on bamboo crafts, on the one condition that they would pay back the money when they could. And it worked. So much so that in 1976, the Grameen Bank, known as the bank of the poor, was created in order to provide credit to the most disadvantaged people.

This successful model was brought to Europe three decades ago by Maria Nowak, a Polish-born economist, who fled her country in 1943, and graduated at the Institut d’Études Politiques in Paris and the London School of Economics. Nowak met Yunus and brought microcredits to France in order to give a chance to the excluded. Today Nowak is a benchmark in the field and has written several works (La banquière de l’espoir: Celle quién prête aux exclus, 1994, La Place des invisibles, 2004, On ne prête (pas) qu’aux riches. La révolution du microcrédit, 2005 and Le microcrédit ou le pari de l’homme, 2009) in order to raise awareness on the idea and prove that this social credit model contributes to eradicating poverty, avoiding financial exclusion and fostering the social integration of people at risk of exclusion, also in developed countries.

According to the AEM (Spanish Microfinance Association), experience in Europe over the past 30 years demonstrates that the development of self-employment and microenterprises, with the combined backing of microcredits and accompaniment for entrepreneurs, has made it possible for vulnerable people to integrate and improve their personal situation. It also contributes to achieving the Sustainable Development Goals (SDGs), reducing inequalities (SDG 10), bringing an end to poverty (SDG 1), and generating decent work and economic growth (SDG 8).

Microfinance in general and microcredits in particular are undergoing a critical juncture as a result of the complexity of Europe’s socio-economic scenario, in which the consequences of the COVID-19 pandemic continue to linger and uncertainty looms over the effects of the war in Ukraine and all its consequences in regard to economic and social matters, not to mention the threat of the climate crisis.

According to the report by the European Commission on Microfinance in the European Union: Market analysis and recommendations for delivery options in 2021-2027: Final report, Europe represents just 10% of the global microfinance portfolio, with one million active borrowers and disbursements of EUR2 billion in 2017, 50% up on 2014. Furthermore, at the close of 2019, the value of the total microcredit portfolio stood at EUR3.7 billion, with 1.3 million active borrowers, according to the Microfinance in Europe: Survey Report. These figures demonstrate that, in recent years, the sector has followed a rising trend in Europe, where MicroBank, CaixaBank’s social bank, is a benchmark and leader in microfinance. Additionally, according to the Microfinance in Europe: Survey Report, the increase in self-employment and business start-ups boosts the crucial role of microfinance in enabling microenterprises — accounting for upwards of 90% of the total number of European enterprises— to overcome difficulties when accessing the financial resources they need. Furthermore, the study concludes that microfinance can unlock the entrepreneurial potential within under-represented and disadvantaged vulnerable population groups, the number of which remains significant in Europe.

As a European leader in microfinance, MicroBank is backed by the core European institutions dedicated to fostering entrepreneurship and microfinance: the European Investment Fund (EIF), the Council of Europe Development Bank (CEB), and the European Investment Bank (EIB). This support comes in addition to the participation of 270 entities throughout Spain that provide knowledge on people receiving the loans, in addition to advising and conducting in-depth tracking on the projects. This business model, which is unique in Spain and practically across Europe, makes the project sustainable over time and achieves a capillarity that enables it to cover all areas of the country, fostering the financial inclusion of all groups.

MicroBank’s microcredits, however, are not exclusively intended for providing support to businesses. In fact, last year the bulk of the social bank’s activity was connected to providing support to families with fewer resources and difficulties in accessing credit. Specifically, MicroBank granted 86,859 microloans to this group to cover particular needs throughout 2021, 28% up on the previous year. This financing amounted to EUR547 million, representing a 46% rise with respect to 2020, “In MicroBank’s 15-year history, we have adapted our activity to suit the characteristics of the economic and social context at any given time. In that regard, in the wake of the pandemic, the priority has been to support the needs of vulnerable families, without ever losing sight of the backing for entrepreneurs and funding for companies with a social impact,” explains Cristina González, the general manager of MicroBank. Precisely this last segment, comprising specific facilities for sectors with a social impact, contributed to implementing 5,142 projects throughout Spain last year, for an amount of EUR210 million. Therefore, in total, MicroBank closed 2021 with a record figure for both the number of operations arranged and the volume of funding, with 107,222 loans and EUR953 million, respectively, 5.8% up on the previous year. Furthermore, 17,007 jobs were created last year thanks to MicroBank’s support for entrepreneurs. Out of the jobs generated among the most vulnerable groups, it is worth highlighting those for young people under the age of 35, women and people who have previously been unemployed, segments with especially high unemployment rates.

The accumulated scope of the social impact generated since the bank’s founding 15 years ago is considerably higher, with 1,200,000 operations and funding amounting to EUR7.7 billion which, in turn, have generated a total of 283,875 direct jobs. 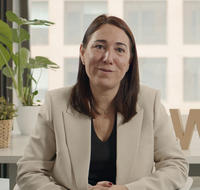 Since its founding in 2007, MicroBank has geared its work towards facilitating vulnerable groups’ access to credit and basic financial services. One of its core areas of activity is specifically the granting of microcredits to start-up or consolidate businesses, intended for the self-employed, entrepreneurs, and microenterprises. In 2021 alone, the bank granted 15,221 loans for a total amount of EUR196 million. The case of Sonia Solà, entrepreneur and founder of Wavekup, is just one of the thousands of examples of business ideas that have received financial backing from MicroBank. This financial support drove the launch of a multichannel platform aimed at career vocation and personal growth advisory.

Wavekup is targeted mainly towards adolescents between 13 and 18 years of age, and provides users the tools with which to learn the ins and outs of all kind of traditional and emerging professions, aiming to help them with more informed career choices. “I knew that I was in the wrong place”, remembers Solà, whose case illustrates what happens to countless young people: They choose a trade or profession without the necessary information to weigh up its pros and cons and end up leaving education early or frustrated at work. Aware of the fact that she had not made the right choice, Solà decided to launch Wavekup, with the support of MicroBank, to help young people discover what they like and the specifics of various career opportunities via interviews with professionals of each relevant sector and self-knowledge and career guidance workshops.

Note to fretting US liberals: Keep your adult diapers on | Donald Trump

Note to fretting US liberals: Keep your adult diapers on | Donald Trump

Borrowell’s Eva Wong On Making It