Sam Smith, the City superstar, reveals why she stepped down from her job

There have been many highlights in the seven years Sam Smith has been judging the Everywoman Awards, which celebrate female entrepreneurs.

But the one she’s never forgotten was the 2016 ceremony when there was an appearance from the women who inspired the film Made In Dagenham, about the female workers at the Ford factory in Essex who, in 1968, went on strike for wages that were in line with those of their male colleagues with the same skills. Their fight eventually led to the Equal Pay Act of 1970.

‘All those women who’d worked on the shop floor and were obviously by then in their 90s went on stage,’ Sam recalls. ‘There wasn’t a dry eye in the house. For at least a year afterwards every time I thought about it I’d start welling up. It made you realise how just a few women could create huge changes, and change is what I’m all about.’

There’s no question Sam, 48, the single mother of eight-year-old Aoife, is one of the greatest trailblazers for businesswomen.

The founder and chief executive of finnCap Group plc — the largest broker for companies listed on the London Stock Exchange’s AIM growth market, advising 118 clients and raising £52.4 million in the past financial year — she was the first woman (as well as the youngest at 33) ever to run a stockbroking company.

Sam Smith, 48, was the first and youngest woman ever to run a stockbroking company. Her company finnCap Group plc turned over £52.4 million in the past financial year and advised 118 clients

Many years later, she’s still the only one. And of companies in the FTSE 100 index, she’s one of just nine female CEOs.

Over the decades, Sam’s seen ‘massive, massive shifts’ for women in the workplace. A grammar school girl from Surrey, at 17 she bagged work experience at the London Commodity Exchange, to find she was one of only two women on the trading floor.

‘I walked in, in my skirt and blouse, and it was unreal. There was wolf-whistling, a lot of the men making really crude animal noises and they had pictures of naked women pinned to their desks. The amazing thing was I didn’t think it was particularly awful. I just thought, ‘Well, I’m going to have to be a bit punchy.’

‘I had this Teflon attitude that came from my mum and my grandmother, who were both very strong, of the ‘no one’s going to stop me doing what I want to do’ mould. But if I hadn’t had that, it would have been a horrendous environment.’

For years, Sam also never questioned being in a tiny minority at City events.

‘I remember an awards dinner early in my career. There were 600 people; probably five were women. The comedian hosting joked: ‘Where are all the women?’

‘But at that time, that was just normal in any business pitch, any entertaining, any networking event. Whereas now, in every meeting, generally you find at least one woman. So that seems like a huge change.

‘It’s still not enough, but now you feel you’re pushing on an open door rather than fighting for these shifts.’

Over the years, Sam, who founded finnCap in 2007 in a management buyout, has witnessed a dramatic move away from macho boardroom posturing to a gentler style of leadership.

‘That Alan Sugar ‘You’re fired’ stuff is very, very old style. When I see that I just cringe. Are we really still showing this on TV, making people think business is about belittling people?’

In contrast, her ‘more feminine’ style now seems to have gone mainstream. ‘Leadership is definitely becoming more open, more empathetic, more kind. Someone said to me once: ‘You’re just too nice.’ I thought: ‘How weird.’ I could be too indecisive or too weak, but how could ‘too nice’ be anything but a positive?’

Sam has always been refreshingly honest about the struggles of combining work and family. ‘We need to be more vulnerable and not this stereotypical hardcore business person who won’t let feelings get in their way, so women can see that’s OK and normal.’

After her daughter Aoife was born eight years ago, Sam was running finnCap from home within ten days. ‘I had a nanny and a night-nanny so I could do my job. The night-nanny left, but Aoife was sleeping. So I went back to the office after five months, thinking: ‘This is OK.’ 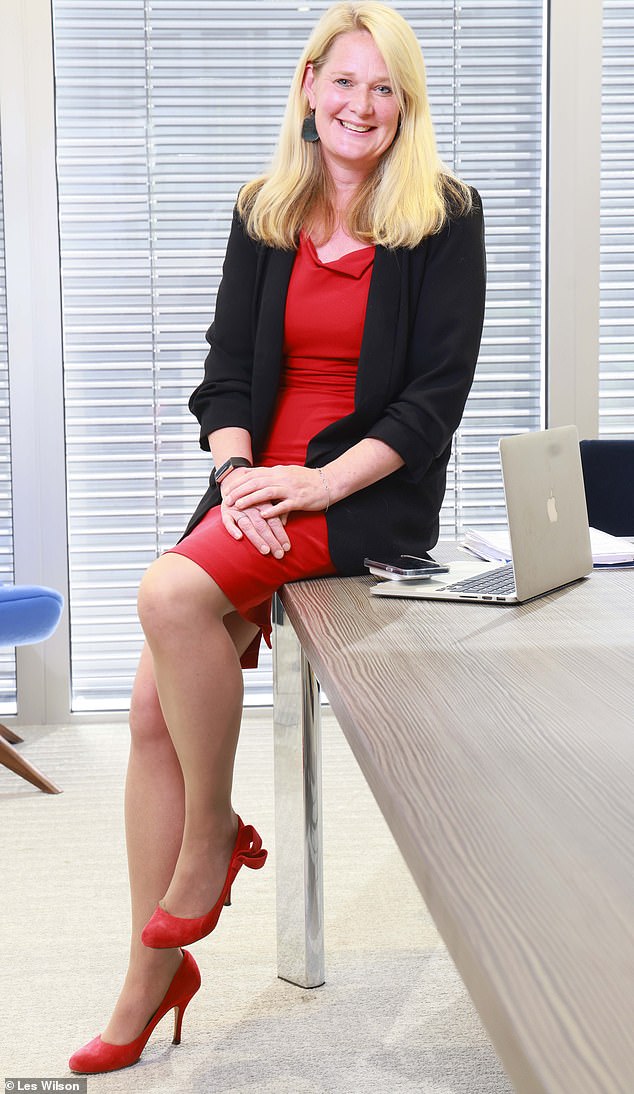 Have you started a business while being a mother? Then enter our Daily Mail Everywoman Aphrodite Award. You must be based, or have your chief operation, in the UK and have set up your business from scratch while raising a child or children aged 12 or under.

The Everywoman Awards give your business instant prestige, plus access to an elite group of the UK’s top female entrepreneurs and mentors and valuable coverage in the Daily Mail.

The deadline for entries is July 11, 2022. For full entry details go to: everywoman.com/ewawards 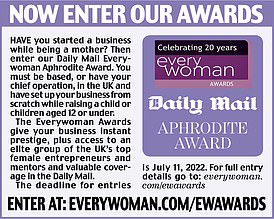 But when Aoife was six months old, she fell ill. ‘She lost all her baby weight and it was like having a newborn again, feeding all night.’ On holiday, both she and Aoife came down with a nasty parasitic bug, which left them vomiting all night. ‘For 16 months I went to work every day on two hours’ sleep,’ says Sam. ‘I didn’t feel I could say anything. I felt people were judging me if I left early. It was horrible.’

Eventually, a doctor signed Sam off sick for two weeks. ‘I was walking across the street and was so tired I nearly fell under a bus. I just stayed in bed for a fortnight. I was too tired even to walk downstairs — but I still did my emails.

‘It took about three years to stop feeling bone-tired all the time, but I worked right through with no time off.’

Now, Sam’s determined to make life easier for the next generation. She’s made it mandatory for staff to take a minimum four weeks’ holiday a year (though they’re allowed unlimited leave).

That holiday allowance doesn’t have to be substituted for other necessary time off — for example, to care for ageing parents or children, for school parents’ evenings or having to wait in for a plumber when the boiler’s broken.

‘Those are not holidays,’ Sam says. ‘These parts of a woman’s life can be extreme, and unless you support them you will lose talented women, who are really hard to find. They drop out because everything feels too hard.’

Unsurprisingly, Sam’s team were devastated to learn recently that in September she’s resigning as finnCap boss (she’ll remain on the board). ‘We had a meeting with all our women because they were worried — it wasn’t about losing me personally, it was about losing a female CEO. John [Farrugia], my successor, who’s amazing, who fights for women, was the only man with 50 women and you could tell he was a bit uncomfortable. I said: ‘Welcome to the last 24 years of my life.’

Sam will still be super-busy with lots of non-executive roles. She’s already bagged a spot on the Government’s new Task Force for women-led businesses.

‘We’re trying to increase substantially the number of women who set up and can scale up their business, because male-led businesses are five times more likely to get a £1 million turnover.’

And, of course, she’ll still be judging Everywoman, this year on the panel for the Mail-sponsored Aphrodite Award for women who’ve started a business while their children are 12 and under.

‘I love hearing about women who don’t come across as your stereotypical entrepreneurs, who have no business experience, so other women see they can do it, too. That’s so important.’

Yet, with characteristic frankness, Sam doesn’t conceal that having split with Aoife’s father several years ago, she also wants to smell the roses.

‘I might even have time to go on an actual date! Running a business during Covid was brutal for family life; now I want to collect Aoife from school every day. And I cannot wait to spend more time with friends without being distracted by emails or phone calls about some disaster.

‘I’ve proved I can make my little difference in a man’s world. Now I’m going to do stuff just for me.’