The course fulfills degree electives of both dance and queer studies. 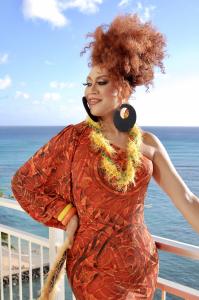 A popular exploratory dance course combining artistry forms such as drag, runway, vogue and pageantry is gaining momentum at the University of Hawaiʻi at Mānoa. The Department of Theatre and Dance recently unveiled a queer dance class, a three-credit elective course that offers students an opportunity to explore the communicative, physical and artistic aspects of dance as a medium of human expression and interaction.

Queer theory and queer studies are emerging in university curriculums across the nation. UH Mānoa is one of the first higher education institutions in the country to offer a full-semester, three-credit performing arts practice based course in queer dance.

“There is a great need to create a space of visibility for queer performing artists,” said Kara Jhalak Miller, an associate professor and associate chair of dance at UH Mānoa. “The dance faculty advocate for and support BIPOC (Black, Indigenous, People of Color) and LGBTQ+ dance, theater and performance scholars, artists, and artistic practices.”

More on queer dance
The dance genre, which can be traced back to the 1980s, was born out of gay and lesbian dance clubs and ballroom culture and has been widely popularized on stage by pop artists such as Lady Gaga and Madonna. Queer dance also features performing art forms such as impersonation, lip-synching and pantomime. The UH Mānoa course incorporates techniques and choreography created by Asian and Pacific Islander māhū (identity with male and female characteristics) here in Hawaiʻi.

Nāna i ke kumu (Look to the source)

At the helm of the cutting-edge dance course is renowned Hawai’i performer Sami L.A. Akuna, a celebrated drag queen icon who is also known by his stage name, Cocoa Chandelier. Akuna, who earned his BFA in dance, BA in theatre and MFA in Asian theatre directing in the theatre and dance department at UH Mānoa, brings decades of experience in the performing arts, having entertained on stages across the continent and here in the islands. The Native Hawaiian instructor presents students with choreography and dance techniques that have graced Hawaiʻi’s entertainment scene through the decades, dating back to revered onstage revues in the 1960s at The Glades, a popular downtown Honolulu bar that featured female impersonation.

“There is a lot of stored history in those production numbers that I’ve learned by watching or participating in these shows in Waikīkī or in fully mounted drag shows outside of those,” Akuna said. “Most of that choreography has been shared and remembered across generations. I’m bringing the knowledge and physical history of those movements to the class as well as creating new ones.”

Akuna’s course fulfills degree electives of both dance and queer studies. The UH Mānoa Department of Theatre and Dance and Women’s Gender and Sexuality Studies are currently working on cross-listing the course in both disciplines.

“Self-confidence is key in this. Exploring yourself, who you are, not being afraid to be a little bit sexy, a little bit sassy, discovering new sides of yourself. I think that’s very much queer dance,” said Hannah Archer, a UH Mānoa dance major enrolled in the class this fall. The classically trained dancer is grateful the UH Mānoa course was created last spring and believes that learning diverse dance genres and their history is key to becoming a well-rounded performer.

“LGBTQ+, māhū and ally students tell me that Sami L.A. Akuna’s queer dance is both empowering and life affirming,” said Camaron Miyamoto, director of the UH Mānoa LGBTQ+ Center. “This is truly powerful and transformative education—exactly what higher education can do when it is at its very best.”

Taking their show on the road

Audiences will have an opportunity to catch Akuna’s students perform. Students are currently preparing to appear at the Honolulu Pride Festival on October 15 and Hawaiʻi State Art Museum on December 2. Their onstage debut was showcased at the 37th annual Universal Show Queen Pageant at Hawaiʻi Convention Center in early October.