Los Angeles Lakers President, and controlling owner, Jeanie Buss is expanding her business horizons as the owner of WOW – Women of Wrestling, an all-female professional wrestling organization that has secured a television deal with Paramount Global.

Many sports fans know Lakers boss Jeanie Buss for quite a few of her unique connections to sports and entertainment. She is the daughter of former Lakers owner Jerry Buss and has looked to fill his memorable shoes leading the organization since his passing in 2013. She has come to the attention of HBO subscribers as her journey through the organization unfolds in the popular series “Winning Time: The Rise of the Lakers Dynasty.” Some may even remember her as the one-time flame and fiancee of NBA coaching legend Phil Jackson.

However, most may not even realize that the 60-year-old is also the owner of the all-female wrestling organization WOW – Women of Wrestling. Her jump into this fictional world is surprising but as a businesswoman, it does make some sense. The wrestling industry is quite strong at the moment with WWE having billion-dollar deals with FOX and the USA Network. Upstart promotion AEW has made major waves and broadcasts its content on TNT and TBS, and there are other promotions in the US and internationally like Impact Wrestling, and New Japan Professional Wrestling that has strong fan bases.

As female fighters become stars in the UFC and the WNBA is in year 26, there is clearly a market for athletic women. The evidence of the strong markets for wrestling and female athletes is apparent in the news that WOW has signed a syndication deal with Paramount Global Content Distribution.

The deal will see WOW events air across the US through various broadcast distributors, as well as in Canada, Australia, Indonesia, Malaysia, and Singapore starting with their debut program on Sept. 17.

“From sports to politics to business and beyond, women’s voices are being heard louder than ever, and the Superheroes of WOW couldn’t be more excited to step into the ring on Sept. 17 and join this revolution,” Buss said in a statement. “We’re grateful to our partners at Paramount Global Content Distribution for providing a platform for these inspiring athletes.”

WOW will be the only all-female promotion with a major broadcast deal in the industry. Proving the power and reach of the Los Angeles Lakers owner and the growing interest in women’s wrestling. WWE produced an all-women’s pay-per-view event in 2018 called “Evolution” and two of the last three year’s Wrestlemania cards featured female title matches in headlining spots. 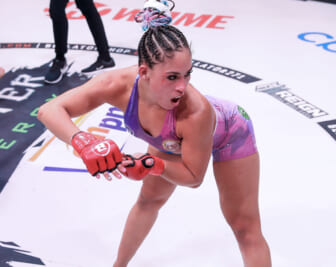 David McLane, the founder of the beloved 1980s women’s wrestling league GLOW: Gorgeous Ladies of Wrestling — which also spawned a fictional series on Netflix — is the creator of WOW.

White Lotus Finale Theories and Predictions: Who Will Die in Season 2?

University of Idaho killings: Police say they continue to investigate whether one of the slain students had a stalker