Tonight in Unpacks: Colts owner Jim Irsay became the first NFL owner to publicly call for “serious consideration” to the removal of Daniel Snyder as owner of the Commanders during an impromptu press conference at the NFL owners meetings in New York Tuesday.

Irsay said it was unclear whether there were currently 24 votes to remove Snyder, but said “I potentially think there will be.” Several active investigations are continuing into Snyder’s personal behavior and workplace culture issues, including by the House Oversight Committee and an NFL-commissioned investigation being conducted by former SEC Chair Mary Jo White.

Neither have published final conclusions. Irsay said any action on Snyder should wait until those reports are final.

Snyder is not at the meetings. His wife and co-owner, Tanya, was inside the meetings when Irsay spoke.

“It is highly inappropriate, but not surprising, that Mr. Irsay opted to make statements publicly based on falsehoods in the media,” a Commanders representative said. “It is unfortunate that Mr. Irsay decided to go public with his statement today, while an investigation is in process, and the team has had no opportunity to formally respond to allegations. The Commanders have made remarkable progress over the past two years. We are confident that, when he has an opportunity to see the actual evidence in this case, Mr. Irsay will conclude that there is no reason for the Snyders to consider selling the franchise. And they won’t.”

About 90 minutes after Irsay’s comments, the owners convened privately with very limited staff. In that meeting, owners heard a limited update on the Washington investigations, Commissioner Roger Goodell said. Goodell said he told the owners to not discuss Snyder until those investigations are complete. No other owners substantively addressed the Snyder issue.

“There’s no reason for there to be any speculation or discussion at this point in time until we have the facts,” Goodell said. “And there was little or no discussion.”

Irsay mentioned the potential financial irregularities uncovered during Congress’ investigation into Snyder as a possible reason for action, but mostly focused on the general workplace culture and allegations of sexual harassment. “Some of the things I’ve heard just doesn’t represent us at all,” Irsay said. “And I want the American public and the world to know what we’re about as owners.”

He also said: “I just believe in the workplace today, the standard the shield stands for in the NFL, that you have to stand for that and protect that,” Irsay said. “And you know, I just think once owners talk amongst each other, they’ll arrive to the right decision, and I just — my belief is that unfortunately, I believe that that’s the road we probably need to go down. And we just need to finish the investigation, but it’s gravely concerning to me the things that have occurred there over the past 20 years.”

Irsay said Snyder’s reported threats of digging up “dirt” on fellow NFL owners with private investigators to fight back against a removal — a claim denied by the Commanders and Snyder — was irrelevant. Irsay was suspended and fined in 2014 for driving under the influence of painkillers.

“You could investigate me until the cows come home, that’s not going to back me off. It’s irrelevant to me,” Irsay said.

Despite speaking forcefully on the subject for nearly 15 minutes, Irsay said the final results of the pending investigations could still change his mind.

Irsay’s seemingly impromptu press conference was a bombshell in the meetings. Despite the media attention on Snyder recently, there was no formal agenda item about him going into today. Goodell did not know Irsay intended to speak to reporters ahead of time, a source said.

The Fire unveiled a series of moves at the club leadership level, headlined by Ishwara Glassman Chrein moving on from her position as President of Business Operations due to personal reasons. Glassman Chrein, an SBJ Forty under 40 honoree in 2020, joined the Fire in 2021 and departs after expanding the club’s front office relationships within Chicago’s corporate and civic communities during her tenure.

The report includes an overview of the work done at the league level over the past two years, progress and programs by all 32 clubs and the results of a workforce demographic study. NHL Senior EVP/Social Impact, Growth Initiatives & Legislative Affairs Kim Davis said the league plans to produce the report every two years going forward.

“Leadership is completely engaged, starting with (Commissioner Gary Bettman) and owners, cascading down into the clubs and the league around this work, and committed to continuous improvement,” Davis told SBJ. “We know that it’s a good start, but we have a lot of work to do and we’re willing to lean into that work.”

The report details efforts related to each of the “7 Dimensions” of the league’s approach to diversity and inclusion: leadership, education, employment, marketing, partnerships, participation and community engagement. Driven by increases over the past two years, a majority of NHL clubs are now engaged in a range of diversity and inclusion initiatives. Click here to read the full report on NHL.com.

Two premium areas at Rocket Mortgage FieldHouse have new title sponsors that will be in place for the  Cavaliers‘ Oct. 23 home opener against the Wizards, reports SBJ’s Bret McCormick. The two clubs will now be called the Lexus Signature Lounge and SeatGeek Members Lounge. Also, the Cavs will be opening a Caesars Sportsbook in the venue in January 2023, when sports betting is officially legalized in Ohio.

The Lexus Signature Lounge is the nicest and most exclusive premium space in the FieldHouse, providing views of the players’ hallway and tunnel. Only 160 memberships are available, and they include a premium dining experience tucked under the seating bowl on the event level. Membership costs vary based on seat location and tenure of the member, though the Cavs declined to share specifics.

The SeatGeek Members Lounge is accessible from the main concourse but is reserved exclusively for members of the Cavs United fan club and the Monsters Hockey Club (season-ticket holders for the venue’s AHL tenant). Members can eat, drink, and socialize before, during, and after games and events. SeatGeek has been the official ticketing partner of the venue, the Cavs and the Monsters since late 2020.

The NBA regular season gets underway tonight, and SBJ has deep season preview sections in both the weekly edition and today’s daily publication. The latest headlines: 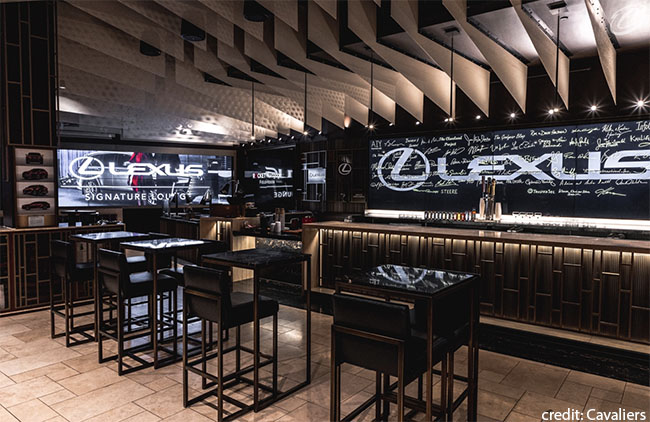 EA, which is doing the promotion in conjunction with game developer Codemasters, is offering the free trials through Monday on PS4, PS5, Xbox One and PC. To commemorate the race, which takes place Sunday in Austin, the game also will have special U.S.-related items like a stars-and-stripes livery for players to use through Nov. 7. In a video released today on the game’s social media channels, Ricciardo gives some tips on how to get round COTA quickly.

EA has set up a special #RicciardoChallenge contest where fans can post on social media using that hashtag (plus #F122gamesweepstakes) through this weekend for a chance at a virtual meet-and-greet with Ricciardo. The driver will also race the winner in the game, the standard edition of which costs $60. Ricciardo is repped by CAA Sports and drives for McLaren Racing through this season, but the team did not renew his expiring contract.

With the Dodgers’ Mookie Betts on first base, the drone entered the stadium’s airspace and dipped near the field of play, forcing umpires to halt the game for multiple minutes. Because a criminal investigation is underway, MLB declined comment. However, the drone flight was a clear violation of an FAA sporting event temporary flight restriction.

Both federal and local law enforcement officials typically investigate drone violations, and, according to sources, MLB will fully cooperate with authorities after this latest incident. Petco Park was the scene of a previous drone incident in May of 2017, when an unmanned object slammed onto the field while the Padres hosted the D-backs.

In other baseball-related tech news, Friend notes Bleacher Report will produce alternative late-inning streams of Games 1 and 4 of the ALCS that will allow fans to live-chat with broadcasters during the game’s tense moments. 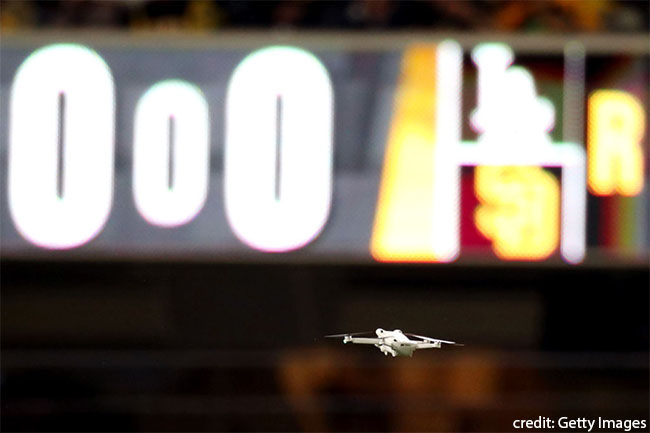 FAA disallows drones from flying near any sports venue with a capacity of 30,000-plus an hour before the event until an hour after

The 378-seat Times Center in Manhattan was packed for two days last week during the 21st annual CAA World Congress of Sports, and much of the conversation centered around the disruption and innovation in today’s sports business landscape, writes SBJ’s Erik Bacharach.

Over a stimulating two days, about 750 attendees were on hand for panel sessions featuring four league commissioners among a slew of other top executives in and around sports. Oak View Group co-founder and CEO Tim Leiweke: “We are an industry that talks to each other. You think other industries come together and do a kumbaya? No way. That’s an amazing trait and a wonderful trait about our industry.”

Topics that emerged as top-of-mind during the event: the continued rise of women’s sports; the future of the RSN model; and the related themes of expansion and disruption, both watchwords with regards to the MLB playoffs, NBA franchises, the NASCAR schedule and, of course, college football conferences.

In the latest edition of SBJ Media, John Ourand covers:

Sports Business Journal’s Reader Survey is back! This year’s questions take a broad look at the industry and the many changes that have occurred in recent years. Questions include:

The survey will take no more than six or seven minutes to complete. Click here to cast your votes and look for the results in SBJ the week of Dec. 5.

Michael B. Jordan returns to star in “Creed III,” which he also directed

4 Tips For Women Forging A Career In The Gaming Industry