How to Handle Conflict: A Mediation Expert Explains

“Human beings in our society can’t even talk to each other anymore,” expert mediator and negotiator Hesha Abrams tells Entrepreneur. “People think, ‘If you think or believe differently than me, well, you’re just an idiot, and I will try to explain away, argue away, shout away your ignorance.’ Which doesn’t work. It’s so foolish, and it’s literally destroying our society.”

Abrams has seen more than her fair share of conflict throughout her 35-year career. But when the now-expert mediator got her start in business litigation, mediation was primarily used in divorce and labor-union cases — not in civil litigation, much less criminal. Abrams saw the tool’s potential to resolve disputes beyond that narrow scope.

So she went to Dallas federal judge Joe Fish to test her theory. He gave her five cases to start — and Abrams settled them all. “I did everything wrong,” she laughs, “but I still settled all five of them. So both the judge and I said, ‘Okay, there’s something cool here.’ And then that started a lifelong journey.”

“We all think that human beings are driven to want to win. And that is not true.”

Abrams has put her skills to the test in numerous high-profile, high-stakes conflicts — from software litigation among confidential parties, to trade secret cases over the recipe of a famous, popular product, to emotional and political battles over teaching the Bible in Texas public schools. Earlier this month, she released her first book, Holding the Calm: The Secret to Resolving Conflict and Defusing Tension, which provides tips on reading situations and simple strategies to solve problems.

“We all think that human beings are driven to want to win,” Abrams says. “And that is not true: 90% of us are driven to not lose. Big difference. I wrote this book because I have 35 years in the trenches of human conflict, which means anger, rage, self-righteousness, stubbornness, arrogance, stupidity, fear.”

Abrams’s mediation tactics have come a long way since her early days in Dallas. Part of that comes from her intensive study of human behavior. Though the economist Adam Smith introduced the idea that people act rationally and in their own self-interest, new research, particularly that of the Nobel-Prize-winning psychologist and economist Daniel Kahneman, suggests otherwise — because we’re too susceptible to emotional and cognitive biases.

Hitting an adversary with data, facts and logic in the heat of an argument is futile, Abrams says, because the amygdala, the negativity and fear center of the brain, activates in the face of conflict and shuts off the prefrontal cortex, which controls reasoning and problem-solving. Additionally, Abrams describes the ocular inclusion and auditory exclusion that accompanies tense situations: tunnel vision and an inability to hear what’s being said.

“Your world becomes very small when you’re in stress or conflict,” Abrams explains. “A mediator, coach or advisor helps broaden the view and says, ‘I can see someone else’s perspective.'”

Related: Understanding the Other Person’s Perspective Will Radically Increase Your Success

“It acts like a rabbit’s foot or a talisman to get my amygdala to calm the heck down so I can think.”

The formula for any conflict is simple, Abrams says: It comes down to powerlessness. You’re trying to make someone think or believe something he or she doesn’t want to think or believe, or vice versa. That feeling of being out of control triggers the amygdala, she continues, and that leads to bad behavior because most people aren’t equipped with the tools to deal with conflict effectively.

“That’s why I give people tools,” Abrams explains. “I came up with this little mantra — ‘Holding the calm.’ If you say to someone, ‘Take a deep breath,’ it doesn’t work, because what it’s saying is, ‘You’re out of control. I’m going to tell you what to do.’ All that does is increase the feeling of powerlessness, which makes the amygdala trigger more.”

Abrams relies on the mantra herself whenever she feels triggered. “It acts like a rabbit’s foot or a talisman to get my amygdala to calm the heck down so I can think,” she says. “And then I think, I’m not powerless here. I have tools. Which tool am I going to use? How am I going to choose to react to this situation? And it’s different for every person.”

Holding the Calm is broken into five parts and 20 chapters, with each detailing one of Abrams’s tools, along with stories to illustrate it. Abrams stresses that all of the tools are accessible and easy to use, but people should feel free to choose whatever they feel comfortable with depending on the situation. 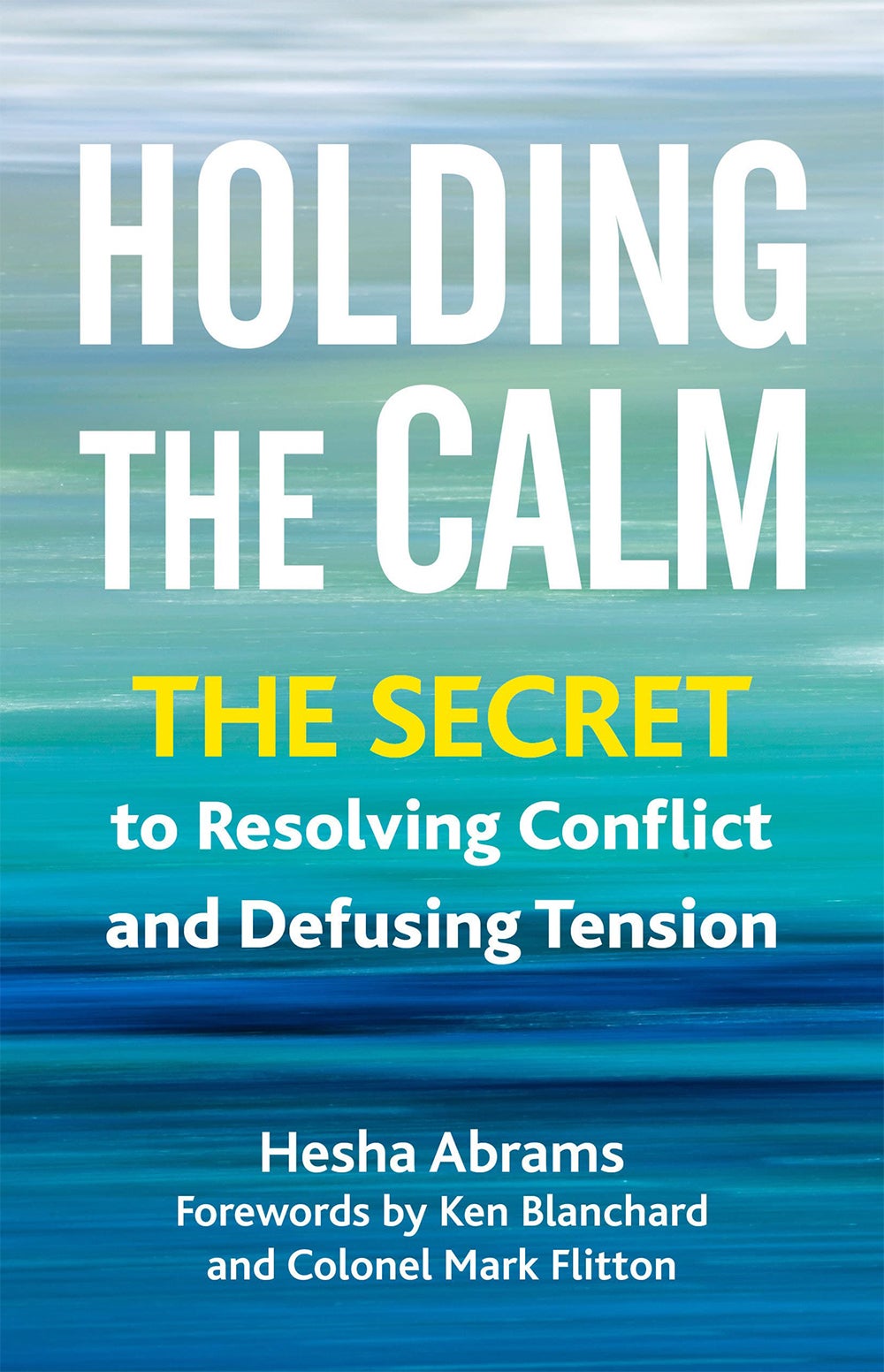 Abrams says she included “defusing tension” in the title because wherever there’s conflict, there’s tension that’s been building — whether both parties are aware of it or not. The key is to address that tension head-on to avoid making a bad situation worse. She uses the analogy of spilled spaghetti sauce to drive home her point.

“If you wipe it right up in the sponge, it comes right up,” Abrams explains. “You let it sit overnight, and you’re scraping it off of the spatula. You let it sit for a year, and it’s old and gross and moldy. Wiping up the spaghetti sauce when it’s wet is much easier. But we tend to not do that — then we have to deal with it when it’s bigger and uglier.”

Related: Here’s the Real Cost of Ignoring Your Problems

“Talking to a daisy, wanting it to be a rose, is just foolish.”

According to Abrams, the most difficult cases occur when those involved have nothing to lose. “I don’t care if it’s a small thing or a big thing — if you’ve got nothing to lose, you have no risk,” she says. “And then you can be more arrogant, self-righteous and stubborn, and less pragmatic. The legal system has a way of beating you up, and it’s like it’s tenderizing you. Some people just need to get beaten up a lot before they’re willing to do what they could have done earlier.”

That’s why a case where one roommate’s cat peed on the rug might be more difficult to resolve than a high-profile one between Fortune 100 companies, Abrams says. It all comes down to the individuals in conflict, and what their real motivations are.

Abrams emphasizes that we’re all products of our upbringing, whether we like it or not, and that has a significant impact on how we respond to conflict. “People can go through lots of therapy and become better versions of themselves, but if you are a rose, a daisy or a daffodil, you’re not changing — you’re a rose, a daisy or a daffodil,” she says. “You can be a better version of yourself with personal growth, therapy and learning, but you’re going to be who you are. So talking to a daisy, wanting it to be a rose, is just foolish.” Talk to the daisy like they’re a daisy, Abrams says, and you’re the one in control.

The first step to overcome that is to let go of caring what other people think — easier said than done, Abrams admits, because women have been conditioned to fit in and people-please. She also points out that women haven’t traditionally held power, which poses yet another challenge when it comes to feeling in control.

Related: 11 Secrets to Staying Productive and in Control

“I know how to really solve problems — what actually works.”

Unfortunately, it can be difficult to foster meaningful dialogue and resolution in our divided nation today. Abrams has witnessed the deterioration of communication up close over the years: “Our society used to be a little more civilized, where you wouldn’t say the things that you thought. Well, with the advent of social media, people can now say all kinds of nasty, mean and horrible things — and there’s no consequence.”

But perhaps better than anyone, Abrams also knows that we have an arsenal of conflict-resolving tools at our disposal, if only we prepare ourselves to use them — because she’s been doing it for decades.

“I know how to really solve problems, not what should work, not what I want to work, not what philosophically would be nice if it worked — what actually works,” Abrams says.

Catching Up With the KPMG Women’s PGA Champion