by Staff
0
2
SHARES
13
VIEWS
Share on FacebookShare on Twitter
About 72 competitors from across Kentucky spent a recent Saturday making pitches for their best new-business ideas, an event “dedicated to inspiring the next generation of great entrepreneurs.”

Demo Day was the culmination of a three-week, immersive experience for teens chosen for the Governor’s School for Entrepreneurs, says Natasha Sams, the executive director.

Eighteen teams of four strode to the balloon-decorated Northern Kentucky University stage as energetic walk-up music played. Each team had eight minutes to convince judges why their business proposal was the best.

Five hours later, winners were selected, trophies awarded and all 72 came back on stage for a confetti blast and hugs with new friends from across Kentucky.

Dave Knox, executive director of the Blue North entrepreneurship accelerator, says judging the Governor’s School is a bit different than a standard pitch competition where the entrepreneurs have spent months — or even years — working on their businesses.

“A few things stood out with this year’s winners. First, they expanded their thinking to tackle problems that were more than just ‘high school problems’ that they dealt with every day. By looking at problems like parking and athletic training, they broadened their mindset of the total addressable market,” said Knox, one of four judges.

“Second, each of the winners clearly articulated a problem and solution. Instead of relying on an overload of statistics, they stated exactly how they planned to solve the problem of their consumer. Finally, each of the winners showed great teamwork as they contributed equally throughout the presentation with no one team member overshadowing the others,” Knox says.

There are two Governor’s School cohorts each summer, with 72 high school students living and learning full-time at NKU. At this second cohort, the tragedy of Eastern Kentucky flooding interrupted the last week.

LeAnn Campbell, a student at Breathitt County High School, was part of the team Pre-Covery, which pitched an app showing teens how to protect themselves from sports injuries. Because of flooding in her hometown of Jackson, Kentucky, LeAnn had to go home the day before Demo Day. Her team persevered with only three students onstage.

The audience did not know the team was missing one of its presenters, but they did hear about a different kind of adversity suffered by Pre-Covery’s first speaker, Lilly Hartmann of Henry Clay High School in Lexington.

In March, Lilly played the best match of her high school tennis career, or so she thought. Before she and her partner could hit the winning shot, three seconds of disaster happened, and Lilly knew victory was gone.

“Hearing the words ‘torn ACL’ was one of the most devastating things I’ve ever had to hear,” Lilly explains. Not being able “do the sport that I love and spent countless hours in hurt more than a tear itself.

“Three seconds and an athlete’s life is forever changed,” said Lilly, who’ll continue to wear a knee brace for several more months. “Every year 2 million high school athletes get injured. Over half of these are from overtraining injuries. This is enough to fill Rupp Arena 85 times,” she says.

Fellow team members explained their marketing strategy, cost and profit estimates, and how they secured partnerships with physical therapists and doctors. Their goal is to cut the number of high school injuries in half. Lilly concluded the pitch by saying their product could have informed her she was at high injury risk due to her age, gender, and family history. She could have prevented it by doing more hamstring-focused workouts, she says.

Pledging to “teach athletes to learn their limits,” Pre-Covery came in third place in a day of highly competitive presentations. 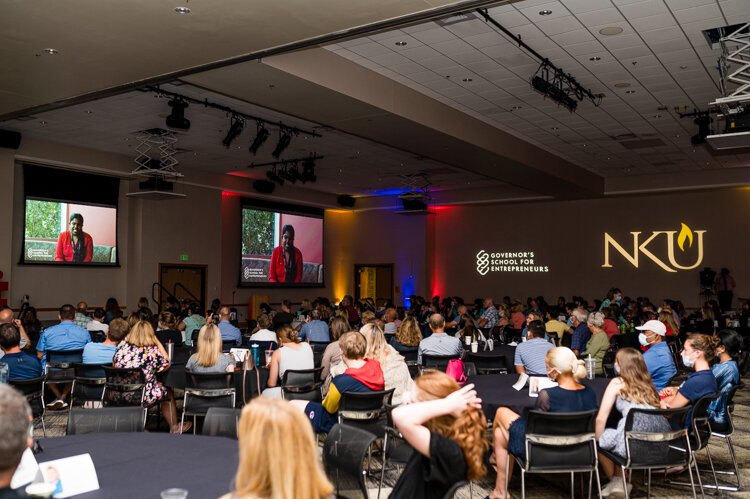 Demo Day at Governor’s School for Entrepreneurs, NKUIt was easy to forget, at times, that these were high school students because the pitches were so well prepared, persuasive and so darned practical.

One team called FitCheck offered a system to help women aged 35-plus to make better use of clothes already in their closet. FitCheck would obtain photos from customers’ closets, then give them tips based on “color theory technology.”

Called “Es,” the competitors were comfortable tossing around business terms like “dynamic pricing,” seeing the value of TikTok and Instagram for marketing, and detailing costs in their business plans for legal fees, insurance, accounting, app development, and advertising.

Judges snapped back with questions like “What’s your strategy to be a trusted resource?” Usually answering with concise examples, team members seemed ready for queries. Weeks of brainstorming on whiteboards, researching statistics about their topics, and nailing down sponsors around the state resulted in a camaraderie that was obvious.

Jack Wilson of Highlands High School in Fort Thomas was a member of second-place winner TestPeak. Team members described their own struggles with test anxiety and shared stats showing it’s a widespread issue, significantly worsened during the pandemic.

TestPeak is a toolbox to help students learn how to study before tests, how to breathe during tests, and to use an app providing reminders and a planner.

The winning pitch was Pivot Parking Solutions, which proposes installing RFID chips (the kind of radio frequency technology used in hotel key cards) in parking spaces. That way, drivers would know exactly how many parking spaces are available. And parking lot operators could maximize profits per parking space.

The $500 Reconstruct Challenge Award, given to a team with an idea aiming to make the world a better place, was awarded to Stay Rooted, which included Elaine Chan, a junior at Ignite Institute in Boone County. Stay Rooted is a resource-based event focused on the mental health of farmers.

In a video starting off Demo Day, Elaine says high schoolers should apply to Governor’s School for Entrepreneurs (GSE) “not only because of the scholarships but because it’s an amazing opportunity to make new friends, meet new people, and gain new mentors.” According to organizers, the event should result in about $5 million in scholarships.

Here’s what other Demo Day participants had to say about the Governor’s School for Entrepreneurs:

Sams, the GSE director, says program alumni have launched over 30 small businesses in the state of Kentucky. “One of the things I love about entrepreneurship is that it does not have a starting age and it doesn’t have an end age,” she says. “If you have an idea and a passion, you can start at 14, 15, or 16 years old. Whenever it strikes you.”

For more information, visit the Governor’s School for Entrepreneurs website.

Miss Manners: How do I handle intrusive questions about my son?

Are you too old to start over? Don’t underestimate yourself.