Game Changer Wrestling is St. Louis, Illinois-bound for GCW Gateway to the Death. This Thursday’s event, live from Pop’s Nightclub in Sauget, features a number of notable names. In addition to company stalwarts including EFFY and Alex Colon, viewers will see the company debut of Ring of Honor star Delirious. Based on the card announced, it’s fair to say that there will be much to see and experience. As always, the action will be available to watch live on FITE if in-person attendance isn’t possible. Without any further delay, let’s take a deeper dive into the action to come.

As noted earlier, at GCW Gateway to the Death, Delirious will make his Game Changer Wrestling debut. This isn’t to say that he hasn’t been affiliated with the company in the past, however; during this year and the year prior, he appeared for GCW’s sibling promotion, Jersey Championship Wrestling, in multi-person matches. However, it’s this Thursday when he will not only make his GCW debut proper but do so in singles competition. Ring of Honor fans will be familiar with this masked enigma’s work, though it was in the Pennsylvania-based International Wrestling Cartel where he saw the lion’s share of his success, a 2x Super Indy Champion included in his accomplishments. At Gateway to the Death, he takes on a GCW favorite in EFFY.

Currently, EFFY is one-half of the GCW Tag Team Champions alongside Allie Katch, who will also be in singles action on this show. However, when he isn’t competing for GCW, he can be seen wrestling in a variety of promotions, Black Label Pro and Wrestling REVOLVER included. “The Weapon of Sass Destruction” can work a number of styles but, much like Delirious, it’s his charisma that captured the attention of independent wrestling fans throughout the years. Given his success, it’s easy to see that EFFY enters each match with confidence. However, against a new opponent in the form of Delirious, he’ll have to be at the top of his game. Who will have their arm raised at the end of this first-time encounter? 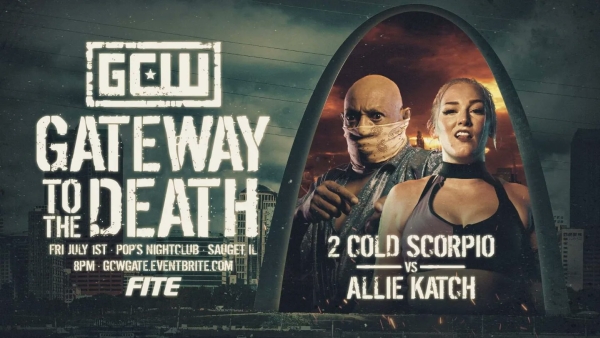 While EFFY is busy with Delirious, the other half of BUSSY in Allie Katch will have her hands full at GCW Gateway to the Death. Whenever GCW announces a new event, one would be right to assume that Katch will be on the card. Given her status as arguably the most heavily featured female competitor in the promotion, this should come as little surprise. Since she shed her previous alias of Allie Kat, she’s become more focused on showing that she’s more than just a character, able to compete at a high level against men and women’s wrestlers alike. Katch will be in for a tall task this Thursday, when she goes head to head with the legendary 2 Cold Scorpio, who’s making his GCW return on this very show.

Often seen dancing to the ring to ‘Jungle Boogie,’ one shouldn’t mistake 2 Cold Scorpio’s charisma for a lack of legitimacy. This high-flying veteran of the squared circle boasts over 3 decades of wrestling experience, wrestling everywhere from well-known promotions including WWE and Extreme Championship Wrestling to contemporary independent organizations the likes of C4 Wrestling and Violence X Suffering. He’s also been a valuable veteran presence in GCW, going up against a fellow ring general in Minoru Suzuki and taking ROH World Champion Jonathan Gresham to the limit, just to name a few examples. For the first time in over 2 months, Scorpio steps back into a GCW ring this Thursday, meeting Katch in singles action. Will it be the past or the present that wins out in this match?

GCW Gateway to the Death will take place in Sauget, Illinois on July 1, 2022.

Stay tuned to the Last Word on Pro Wrestling for more on this and other stories from around the world of wrestling, as they develop. You can always count on LWOPW to be on top of the major news in the wrestling world, as well as to provide you with analysis, previews, videos, interviews, and editorials on the wrestling world. GCW Gateway to the Death is set to air Thursday at 8:00 PM EDT on FITE. Tickets are also available via Eventbrite.