So, now we know for certain that the report on whether the Duchess of Sussex did or did not bully staff at Kensington Palace won’t be made public.

Although it would have been intriguing to learn the findings, I can’t help thinking that keeping the report confidential must be the right decision for those involved.

Bullying leaves deep scars, so thrusting the whole thing into the public domain would most likely have brought back unpleasant memories if any intimidating behaviour did take place.

Bullying is difficult to pin down, even to define. It inflicts a kind of mental violence and often leaves its victims fearful of their perpetrator long after he or she is out of the picture.

I have no idea whether the Duchess was a bully, but over the years I have come across many bullies – particularly the type who exert an insidious, undermining effect that’s hard to put your finger on.

Although it would have been intriguing to learn the findings, I can’t help thinking that keeping the report confidential must be the right decision for those involved

Screaming and shouting bullies are ghastly to work for. But it’s clear to everyone around what is going on. That type of bullying is out in the open and there’s often a tacit sense of sympathy shared among colleagues. Which is at least some comfort – particularly as out-in-the-open bullying is often directed at more than one individual.

Far harder to deal with is the kind of bullying that makes the victim question whether they are imagining it or are in the wrong and as useless as they are being told.

The bully cannily plays with the psyche, finding the a weak spot and toying with it like a cat with a wounded mouse. It operates at a more subliminal level, but can leave much deeper scars.

Subtler bullying of this kind is more commonly found in the creative industries – film, art, fashion, journalism – where each employee’s contribution is often based on personal relationships and relies on maintaining a degree of confidence in one’s own abilities.

Once a bully sets on a person, and makes them question their value, it can be lethal.

Bullies are usually damaged characters themselves, deriving their sense of power and authority from undermining others.

They rarely pick on equals or anyone able to fight back. Instead, they seek out the vulnerable. All of which is why it’s vital the new HR ‘policies and procedures’ instituted at the Palace make a real attempt at protecting royal staff.

Our girls battling an identity crisis

The other day a friend revealed that one in four pupils at his daughters’ primary school in Oxfordshire is now questioning their gender.

It sounds unbelievable – until you hear that the NHS has decided to take the word ‘women’ out of its main website guidance on ovarian, womb and cervical cancers and the menopause. If young girls are living in a world where the word woman is deemed unnecessary and inaccurate, is it any wonder they start questioning their identities?

Although many young boys are also dealing with gender confusion, there doesn’t seem to be the same attempt to banish the word ‘men’. So far, prostate and testicular cancer are still allowed to be described as the preserve of those born male.

Let’s get through life in just one piece

I know a lid has to be kept on ‘Ah, the good old days’ observations, but sometimes it’s irresistible.

That’s exactly how I felt watching a video posted online by Novak Djokovic, showing the tennis star and his hunky coaches flummoxed as they attempt to put together a garden trampoline. Oh, for the good old days before self-assembly!

Ikea has a lot to answer for. There was a time when bookcases arrived ready for books, tables already had legs and, yes, children’s toys arrived in one piece.

A time when shopping for a bed didn’t mean scouring the small print for the deadly words ‘flat-packed’. Now though, practically everything that doesn’t cost a fortune requires a master’s in Allen keys, a PhD in baffling illustrated instructions – and a near impossible amount of good temper. 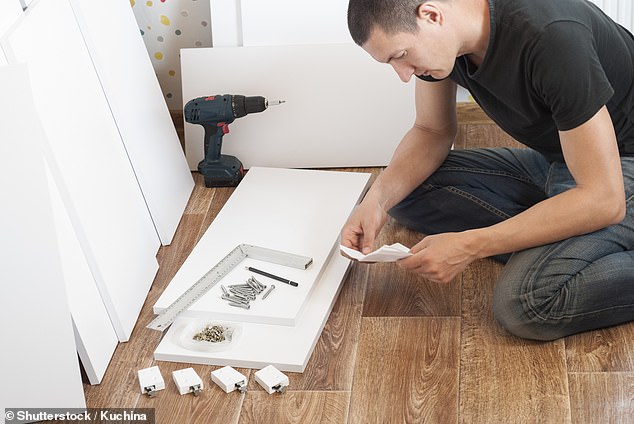 Ikea has a lot to answer for. There was a time when bookcases arrived ready for books, tables already had legs and, yes, children’s toys arrived in one piece [File photo]

You get what you need with the Stones

I’m going to see the Rolling Stones play Hyde Park tonight, as excited as the 14-year-old me going to my first gig – Roxy Music at the Rainbow in 1972.

I know, I know – there’s a strong chance it’ll end up a Covid super-spreader event; the band will look like sequined pinpricks in the distance; some huge bloke will station himself right in front of me; and it will be hell getting there and back.

But I’m also certain it’ll be brilliant, with the ever-reliable Stones ringing out all the old favourites,

They might have penned the fantastic You Can’t Always Get What You Want, but you always can with their live performances.

Why is it four-play for our TV women?

The TV adaptation of Dolly Alderton’s bestseller Everything I Know About Love is thoroughly enjoyable. Immersing yourself in the single girl world of charismatic but exhausting lead character Maggie (played by Emma Appleton) and her three flatmates in 2012 is like basking in a vat of brightly-coloured Aperol Spritz (although the drink wasn’t fashionable then and I can’t remember what was).

It also follows the time-honoured formula of the gang of four. Why four? Little Women by Louisa May Alcott was the founding mother of the genre, with generations of girls identifying with the different sisters. More recently, Sex And The City and Lena Dunham’s Girls have featured female quartets. What is it about four – as opposed to three or five, or any other number – that makes it so appealing to women writing about women’s lives?

Every morning, our cat Coco eyeballs me until I give her a sprinkling of Thrive (think Maltesers for felines). This practice started as an occasional treat but has become her daily expectation – just an extension of breakfast.

I see a similar trait in myself. When David and I began living together he would often make the bed. How wonderful, I thought as I looked admiringly at his boarding school-trained hospital corners. I hadn’t come across any man who had done that before.

Now he does it daily – and, like Coco, I take what was exceptional for granted.