Presented by Dallas-based Boss Women Media and Capital One, the summit featured 26 entrepreneurs and executives from startups and corporations across the U.S., who spoke before a live audience of professional leaders and female students from historically Black colleges and universities.

“I believe if we can create resources for Black women to gain access to capital, we can change families, communities and generations to come,” Marty McDonald, Founder and CEO of Boss Women Media, said in a statement. “I’m on a mission at Boss Women Media to change the narrative around Black women, and sit in spaces that allow others to not just survive but thrive.”

Why did Williams choose Creole fusion for her company’s focus? Look no further than her childhood. She grew up with a blend of Texas and Louisiana flavors and culture, and became a confirmed foodie at an early age. Launching Le Rouge Cuisine made her longtime dream come true.

“I was on a tightrope, trying to balance a job I hated that was paying my bills and the future business I had always dreamt about,” Williams said in a statement. “I remember one day, I turned to God and asked, ‘What do I do?’ To my surprise, in the most calm voice, He said, ‘Jump.’ With assurance and a little fear, I quit my job and began my entrepreneurial endeavor as a self-taught chef.”

Now she’s pursuing her mission “to spread a message of resourcefulness and resilience, fueled by learning your body and exploring fresh food that’s both healthy and delicious.”

Williams will do that partly by working to further education and access to healthy foods in Dallas Fort-Worth communities with limited food options. Her goal is to open a commercial kitchen in Southern Dallas that can serve as a multi-use production space for Le Rouge Cuisine and  for other local companies as well.

Le Rouge founder will be on Food Network next week 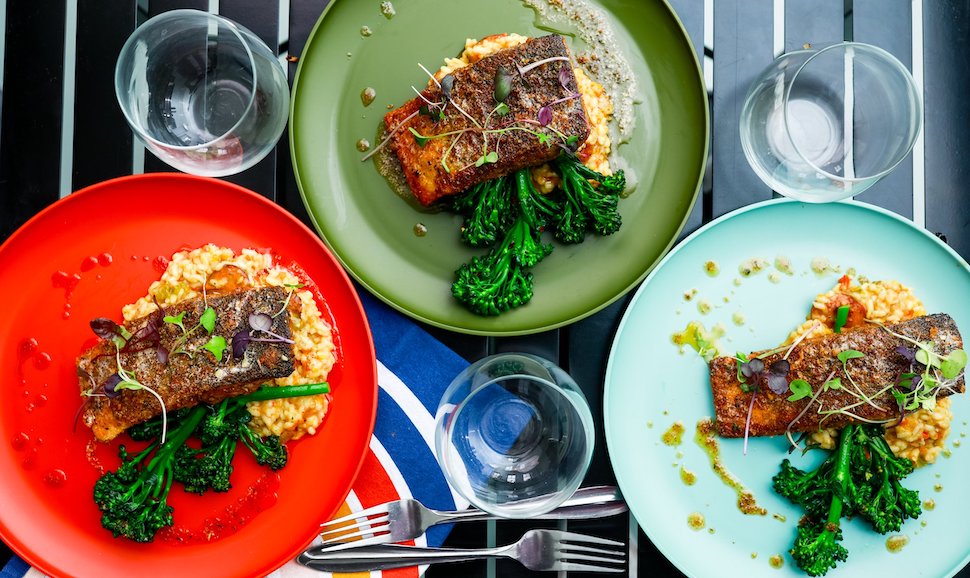 Le Rouge’s Williams is on a roll this week. After taking home the $50K Black Girl Magic first prize, she’s already onto her next competition—and it’s airing next Tuesday, September 6, at 8 p.m. Central on Food Network.

Williams will be a contestant on “Supermarket Stakeout,” the Food Network cooking competition show presented by Iron Chef Alex Guarnaschelli. Chef Amber will be one of four chefs. squaring off in a competitive pop-up kitchen outside a grocery store. The task next Tuesday: making street food, followed by French desserts.

Blair Gyamfi and Morgan Taylor got tired of seeing “glossy images of parenting on social media that create an impossible standard to live up to.” So they got real—by creating a talk show and building a community around it.

Gyamfi and Taylor are the founders of “Moms Actually,” a talk show they host alongside Sopha Rush on their own platform and on YouTube. The trio create “a space for moms to have candid, vulnerable and honest discussions about the reality of womanhood and motherhood,” according to the show’s website.

The show also lives as a podcast, with episodes available for listening on Apple Podcasts, Spotify, Google Podcasts, and a long list of other places.

Topics range from “Balance and Boundaries” in marriage to “Discipline and Doubts” about child-rearing  to “Infants and Intimacy”—how couples can keep their spark alive amid a world of diapers and baby meltdowns.

“This grant could not have come at a better time, because we’re gearing up for season two of our show,” Gyamfi and Taylor said in a statement. “These funds will offset production and operational costs in a major way!”

Championing the experiences of “womanhood, sisterhood, and motherhood through candid and transparent discussions with guests,” the show aims to redefine motherhood—while “breaking away from the unhealthy expectations society has placed on women as a whole.”

“We’re building a community where motherhood meets sisterhood to support those who have felt alone in their personal parenting journey and give them a relatable voice to champion their experiences,” the co-hosts say.

You can see “Moms Actually” episodes and learn more about the show by going here. You can also subscribe to get alerts about new episodes, giveaways, and events.

The third place winner at the Black Girl Magic Summit was the only winner from outside DFW. Based in Miami, Florida, Fathiyyah Doster is a mother who faced and survived two “critical health scares.”

Doster believed juicing was beneficial to her healing process, so she became an entrepreneur and founding her own juicing company, JuiceDefined. Selling raw, fresh, and cold-pressed juices on her own e-commerce platform, Foster offers everything from juice packs to wellness shots to detox drinks.

Committed to providing access to healthier options within Miami’s city limits and beyond, Doster says she’s “driven by a passion to heal our communities through improved nutrition and changing the way we view the foods we consume.”

“The pandemic was difficult, but it actually was a blessing in disguise,” Doster said. “People began looking for healthier options to alleviate symptoms of illness. They were interested in natural, holistic ways to care for themselves. So while it was challenging in many ways, the pandemic also allowed us to scale our business.”

“This year’s pitch competition winners are building inspirational businesses that are positioned for growth while also having a positive impact on society,” said Zainep Mahmoud, Vice President, Small Business Card at Capital One. “Providing $100,000 in grants in partnership with Boss Women Media will not only help the winners grow their companies, but also continue to help communities thrive.”

Capital One’s support for Black Girl Magic is a component of its Impact Initiative, a multi-million-dollar commitment “to support growth in underserved communities and advance socioeconomic mobility by closing gaps in equity and opportunity.”

17% of Black women are starting up or running businesses

But many face obstacles, especially in getting funding, Capital One says—a key reason it supports Black Girl Magic in its efforts to drive lasting change.

Sign up to keep your eye on what’s new and next in Dallas-Fort Worth, every day.

Cheshire officials hold event to bring women in business together